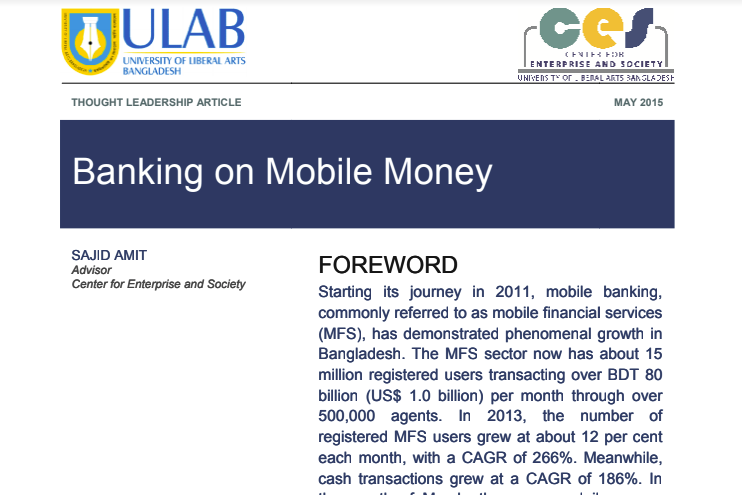 May 2015:  Starting its journey in 2011, mobile banking, commonly referred to as mobile financial services (MFS), has demonstrated phenomenal growth in Bangladesh. The MFS sector now has about 15 million registered users transacting over BDT 80 billion (US$ 1.0 billion) per month through over 500,000 agents. In 2013, the number of registered MFS users grew at about 12 per cent each month, with a CAGR of 266%. Meanwhile, cash transactions grew at a CAGR of 186%. In the month of March, the average daily money transaction amount through mobile banking reached unprecedented levels – registering over BDT 4.0 billion (US$ 51 million). According to Bangladesh Bank data, the total transactions for the month rose to BDT 123 billion.The remarkable development of MFS is better appreciated in the context of the country’s demographic/socioeconomic statistics: a potential market of 160 million people, median age of only 23 years, and per capita income of US$ 840 per annum. The key statistics, however, are a banked population of 20% (i.e., those that have access to formal banking services) and secondly, a mobile penetration of 75%. Thus, the availability of MFS has allowed the unbanked in Bangladesh to skip several stages of development of the banking sector, e.g., setting up of physical branches, and gradually enter the global community of the banked.